The Great Wall of Aristarchus 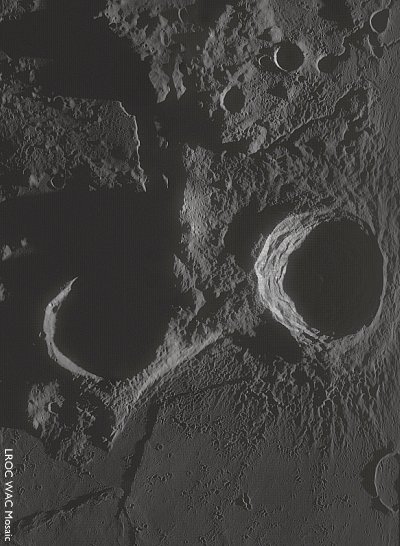 Four days after First Quarter, as the Moon waxes Full, our first glimpse of Aristarchus and its namesake plateau comes before the ground-hugging terminator officially arrives with true dawn. This LROC WAC monochrome mosaic, swept up during four LRO orbital opportunities (in LRO orbits 2496-2499) January 10, 2010, allows us an overhead look at the High Wall contact, between plateau and mare, the most abrupt, angular transition between Oceanus Procellarum and anywhere around the plateau. As dawn briefly reaches over the horizon to this height the bow-shaped Wall often seems to hover by itself. As the smoky, colorful and wispy patterns here, including the bright inner slopes of Aristarchus proper (r) catch the sun, it's easy to see why this prominent near side landmark is the location most frequently cited for reports of "transient lunar phenomena" (TLP) [NASA/GSFC/Arizona State University].