LRO transitions from exploration to science 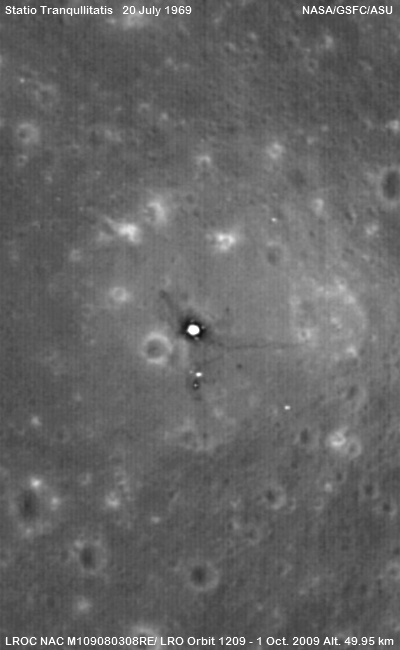 Images of the Apollo 11 landing site from the Lunar Reconnaissance Orbiter clearly show the descent stage, the footprints of Armstrong & Aldrin and various equipment they deployed in July 1969 (including Buzz Aldrin's brief stroll to the edge of the crater east of the lunar module Eagle. Beyond the usefulness to science, LRO's first images of all six manned landing sites provide a poignant reminder of the manned lunar exploration legacy of the United States. Before the close-orbiting precision supporting the LRO Narrow Angle Camera operated by Arizona State University, this clear evidence of human activity on the Moon remained just beyond the camera resolutions of unmanned cameras in the decades since the Apollo orbital mapping cameras. At less than one half meter per pixel resolution, the LROC NAC clearly reveal not simply the LM descent stages of the six Apollo mission but lunar rover tracks and the foot paths of the twelve astronauts who explored the lunar surface between 1969 and 1972 [NASA/GSFC/ASU].
Michael Braukus
NASA HQ

The United States' Lunar Reconnaissance Orbiter (LRO) will complete the exploration phase of its mission on September 16, after a series of successes that added to the transformation of our understanding of Earth's nearest neighbor.

"LRO has been an outstanding success," said Doug Cooke, associate administrator of the ESMD. "The spacecraft has performed brilliantly, and LRO science and engineering teams achieved all mission's objectives. The incredible data LRO gathered will provide discoveries about the moon for years to come." 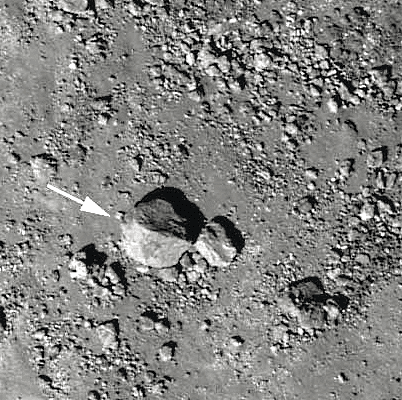 Thirty-five meter boulder among a sea of detail previously unseen in the two Constellation Regions of Interest on the Moon's Aristarchus Plateau. From LROC principal investigator Mark Robinson's report to the Third Annual NASA Lunar Science Institute Conference (Presentation - 17.5 mg PDF) [NASA/GSFC/Arizona State University].
By the time LRO achieves full mission success in March 2011, with data processed and released to the scientific community, it will have sent more information to the Planetary Data System than all previous planetary missions combined.

During its new phase of discovery, LRO will continue to map the moon for two to four more years.

LRO was launched from Kennedy Space Center carrying a suite of seven instruments, June 18, 2009. After an initial Commissioning phase, LRO formally began a highly detailed survey of the Moon the following September.

Among results collected thus far from the mission are original observations of the Apollo landing sites; indications that permanently shadowed and nearby regions harbor water and hydrogen and other volatiles; observations that large areas in the permanently shadowed regions are colder than anywhere in the Solar System; detailed information about lunar terrain, and the first evidence of a globally distributed population of thrust faults, evidence the Moon has recently contracted and may still be shrinking.

The rover was located to within 30 meters using the LROC Narrow Angle Camera, and this highly accurate position data enabled researchers to captured laser light bounced and clearly reflected back again from the French-built retro-reflector situated on the dormant Soviet lunar rover for the first time. This addition to the long incomplete laser reflector array left on the Moon by the U.S. and U.S.S.R. during the Apollo era should finally enable a precision in Earth-Moon distance measurements to within 3 cm, a target some cosmologists hope will aid in answering questions about "locality" of physical laws in the universe.

LRO also supported the Lunar Crater Observation and Sensing Satellite (LCROSS) impact, as the companion mission was sued to determined if the Moon's permanently shadowed craters harbor water ice, to select the Cabeus crater impact site and to observe the wispy fast expanding plume and to study an evolving temperature at the site soon after the LCROSS impact last October 9. 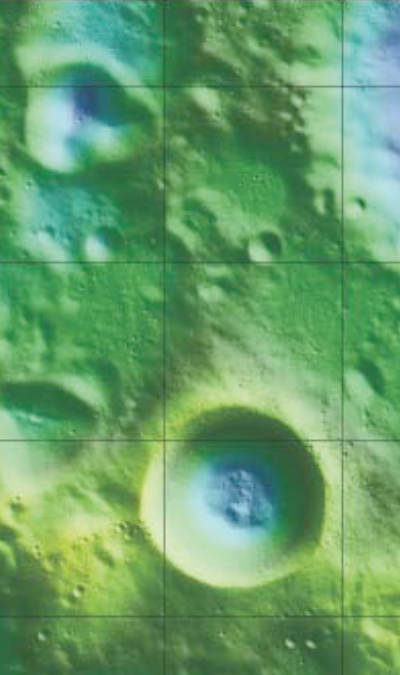 The previously eternally elusive comprehensive details of the "permanently darkened regions" inside and around the Moon's south pole, situated on the rim of 10 km-wide Shackleton crater. Though aspects of Shackleton interior were first unveiled by Japan's SELENE-1 (Kaguya), the suite of instruments on LRO are singularly equipped to eventually detail the entire Moon's surface, whether by Sun or starlight [Maria Zuber/NLSI/LOLA].
NASA's Goddard Space Flight Center (GSFC) in Greenbelt, Maryland built and will continue to manage LRO for the Exploration Systems Mission Directorate.