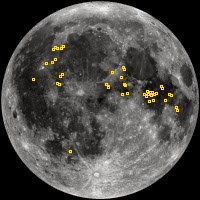 Many young volcanic deposits were recently identified in LROC NAC images. Their sharp nature and general lack of superposed impact craters greater than 20 meters in diameter indicate these deposits probably formed in the last 100 million years, perhaps even more recently than 50 million years ago. An amazing result!

A new paper, (Evidence for basaltic volcanism on the Moon within the past 100 million years, Nature Geoscience 7, 787-791; 2014) presents 70 topographic anomalies, informally called Irregular Mare Patches, or IMPs, most of these occurrences were previously undocumented. The IMPs are thought to be remnants of small basaltic eruptions that formed significantly after the commonly accepted end of lunar volcanism (1 to 1.5 billion years ago).

The best-known IMP, called Ina (or Ina-D), was originally spotted in Apollo 15 orbital photography, and was unlike anything else previously discovered on the lunar surface. Beginning with Apollo era investigations, Ina was interpreted as a collapsed caldera at the summit of a low-shield volcano. Previous interpretations of impact crater densities within and around Ina suggested that this enigmatic landform was much younger than the surrounding mare basalt unit in Lacus Felicitatis (Lake of Happiness).

Not only does the NAC provide excellent resolution, but after 5 years of operation has covered well over 75% of the surface. This combination led to the discovery of many new IMPs in locations across the nearside of the Moon. Ina is not simply a one-off oddity – but rather a signature of volcanic processes that actually occurred in multiple places across the nearside.

All of the lunar landforms identified as IMPs exhibit two distinct morphologies: smooth deposits, which are sometimes connected to the surrounding mare basalt, and uneven deposits (rough-looking) which usually end abruptly at the steep edges of the smooth deposit; it is likely that the smooth materials are covering portions of the rough material.

To estimate the age of IMPs the LROC team measured the sizes and numbers of impact craters on the smooth deposit surfaces (geologists use the crater size-frequency distribution (CSFD) as a metric for estimating the age of a surface). The resulting crater distributions from the three largest irregular mare patches imply ages younger than 100 million years. Indeed, the new crater counts confirmed that Ina is very young, perhaps as young as 33 million years.

Another key set of observations came from digital topographic maps derived from NAC stereo pairs that enabled quantitative relief and slope measurements of six larger IMPs. Measurements of the smooth deposit relief compared to the underlying uneven deposit revealed that the thickness of the smooth deposits (on average 8 meters, with a range of 2-20 meters) is consistent with the previously established thickness of lunar basalt flows.

Topographic slopes were measured at the edges of the smooth deposits where they contact the uneven deposits. Slopes that exceed the angle of repose, which is 30-35°, are evidence of relatively young surface features, because over time impacts and moonquakes will smooth over steep cliffs. Slopes on the edges of many of the smooth deposits exceed the angle of repose, providing more evidence for very young surfaces.

Changing the Way We Think About the Moon

Not only are the IMPs striking landscapes, they also tell us something very important about the thermal evolution of the Moon. The nearside has extensive mare basalt flows covering much of its surface, however we know from analysis of Apollo samples and crater counts that the bulk of lunar volcanism occurred from 3.9 to 3.1 billion years ago, and shut-off sometime around 1 billion years ago. However the IMPs seemed to have formed significantly after the canonical cessation of lunar mare basalt volcanism indicating the interior of the Moon is perhaps hotter than previously thought.

The new study of IMPs extends our knowledge of the extent of these fascinating deposits as well as their young age. What does it all mean? The young, small-volume extrusions of mare basalt imply a thermal history of the Moon where volcanism did not end abruptly, but rather decreased gradually over time (and may not be done!). With these newly discovered young volcanic features, scientists must consider that the Moon has a bit more heat in it that previously thought, an important new constraint for future models of the Moon's thermal evolution. Perhaps the abundance of radioactive elements (which provide heat as they decay) is higher -- important knowledge when figuring out how the Moon formed and evolved over time.

A provocative side note to the new thermal constraints — perhaps the Apollo heat flow measurements were spot on? Astronauts buried thermometers in the regolith during the Apollo 15 and 17 missions. The temperatures recorded were a bit higher than models predicted. At the time, scientists proposed that perhaps the two landing sites were in areas with higher heat flow than the average Moon, or perhaps there was an instrumental effect. The discovery of IMPs and their young age is certainly consistent with the higher temperatures measured by the Apollo crews.

The IMPs are a fascinating part of the story of lunar volcanism over time, and now they must be considered high priority targets for future exploration. A sample return mission from one of these enigmatic deposits would tell us so much about the Moon as a whole. When did these lavas erupt? Is their chemistry different than the basalts returned by the Apollo astronauts? Is it likely that volcanic eruptions may occur at some point in the future?  A highly accurate age date for the IMPs would also serve as a much needed calibration point for the lunar cratering chronology; a crucial improvement not only for lunar studies but also for Mars and Mercury investigations.