The Moon's role in climate change Detailed View of the Solar Corona, "a stream of energetic particles flowing from the Sun, the solar wind," and the Moon holds the best unvarnished record of the Sun's activity as collected near Earth over 4.5 billion years. Astronomy Picture of the Day, March 16, 2010; a detailed image of the Sun's corona during the August 2008 total eclipse from Mongolia. No history of Earth can be complete without a thorough study of the Moon, the "Rosetta Stone of the Solar System." View the full-sized original image HERE [Miloslav Druckmüller (Brno University of Technology), Martin Dietzel, Peter Aniol, Vojtech Rušin].
Paul D. Spudis
The Once & Future Moon
Smithsonian Air & Space

A recent article about the role of global magnetic fields in the loss of planetary volatiles caught my attention. The article addresses planetary climate issues as they relate to Earth, Mars and Venus, but what struck me was this statement:

"We don’t have a direct record of the sun’s history, but astronomers can study other stars that are similar to our sun at an earlier age..."

But in fact, we do have an excellent historical record of the Sun’s history – preserved on our nearby Moon.

The Sun constantly emits streams of high-energy particles, consisting mostly of hydrogen atoms and ions (protons). This stream, called the solar wind, has been monitored and studied since satellites were first launched. High-energy solar wind flows around the protective bubble of Earth’s global magnetic field and into interplanetary space. Some of these charged particles become trapped between magnetic lines of force, creating spectacular displays of aurora, known as the “northern lights.”

The Moon does not have a global magnetic field, so its surface is directly exposed to the solar wind. These charged particles and neutral atoms impinge directly upon the surface, where some of its atoms are retained on the grains, thus creating a recoverable record of matter from the Sun. The antiquity of the lunar surface means a preserved solar record extending back at least several billion years – the average age of the surface units of the Moon.

We have measured solar wind gas implanted onto the dust grains of the Moon using the Apollo samples and have a good indication that this record contains some significant information. One curious and obscure relation in the solar wind record recovered from the Moon suggests that the ratio of some isotopes of nitrogen (specifically, the 15N/14N ratio) has increased over the last couple of billion years. This increase is not predicted in current models of stellar evolution; the current interpretation is that it reflects the addition of a meteoritic component, but changes in the solar output have not been ruled out. So the Sun may be evolving and changing in ways we do not fully understand.

The Sun literally is responsible for our existence – without it, life on Earth would not be possible. Media coverage of climate change tends to ignore the critical fact that the primary driver of climate on Earth and all terrestrial planets is the Sun. Before we can understand how and why climate changes on Earth (and it has repeatedly throughout geological history), we must understand what historic role the Sun has played in this complex exchange.

At any given time, only the uppermost few millimeters of the Moon’s regolith is exposed to the Sun. Because the regolith is continually excavated, buried, mixed and turned over by the bombardment of meteorites, we have a very complex record to decipher. Such a chaotic, random process would seem poised to destroy exactly the very information we need to access and study, similar to the destruction of scientific clues about past climatic conditions on our geologically dynamic Earth. But our nearest neighbor has provided a process that preserves the solar record in ancient regoliths, whereby the solar record is isolated and sequestered for very long periods of time.

The dark maria of the Moon is made up of a myriad of individual lava flows, erupted sporadically but continuously, since 3.9 billion years ago, possibly to as recently as less than 1 billion years ago. These fresh surfaces are readily exposed to the solar wind, which implants its atoms onto the dust grains. From the moment the lava flow cools, this fresh surface is slowly ground up and broken apart by meteorite impact (regolith formation). Then, as new lava flows are extruded, they cover the pre-existing surface regolith, forever sealing it off, along with its preserved solar record, from active surface processes. Thus, thousands of individual lava flows in the maria have buried and preserved millions of ancient regolith deposits, all potentially available for study, allowing us to see not only the output of the current Sun, but the solar wind record of some ancient Sun as well.

Thus, the dusty regolith of the Moon acts like a tape recorder, detailing the output of the Sun throughout time. How might we find and access these ancient regoliths and read the preserved solar record? These deposits are accessible wherever there is an exposed section of bedrock in the lunar maria. On the Moon, such exposure occurs within the walls of craters, sinuous rilles and other structural depressions. Not only did we photograph such exposures during the Apollo missions, we may already have sampled a “fossil regolith” from a unit that is more than 3.84 billion years old. Finding and sampling more of these buried units will allow us to reconstruct the output and history of the Sun over the course of at least the last 4 billion years.

Here is yet another reason to return to the Moon: to understand the history of our Sun, the primary driver of climate and life on Earth. It is ironic that many people who are most ardent in their concern about Earth’s changing climate disparage lunar return because “we’ve been there.” By dismissing the Moon, they are missing one of the most important chapters necessary in understanding the grand story of the past, present and probable future of the Earth and the Solar System. That chapter – holding vital answers necessary for an informed debate about our constantly changing climate – patiently waits for us on the Moon. 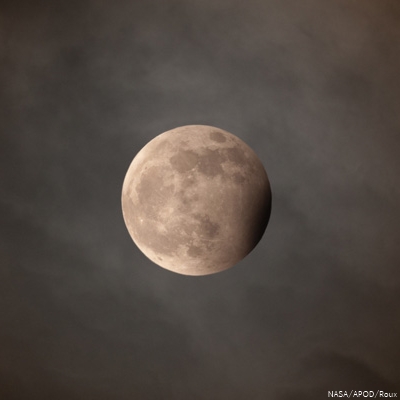 The second Full Moon of December 2009 grazed the Earth's shadow; a New Year's Eve "Blue Moon" partial eclipse captured in this two exposure composite in cloudy skies over Saint Bonnet de Mure, France. Playing across the Moon's southern reaches, the edge of Earth's umbra, our dark central shadow, appears on the right side along with the prominent 109 million year old "young" ray crater Tycho. At Maximum the umbra covered only about 8 percent of the lunar disk.
Posted by Joel Raupe at 11:07 PM