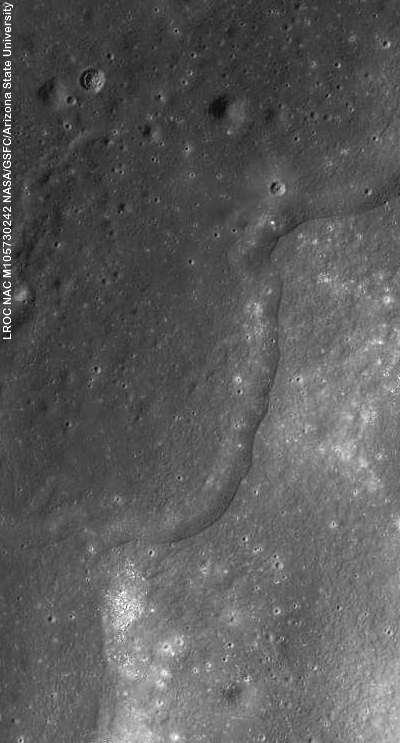 Aitken crater, located at 16.8° S 173.4° E, is a 135 km Upper Imbrian-aged crater. It is notable in that its floor is filled by a mare deposit, and that it, along with the Moon’s South Pole, is the namesake for the biggest and most ancient lunar basin, South Pole-Aitken Basin (SPA). Within its flooded floor are many scientifically interesting features, one of which are wrinkle ridges. 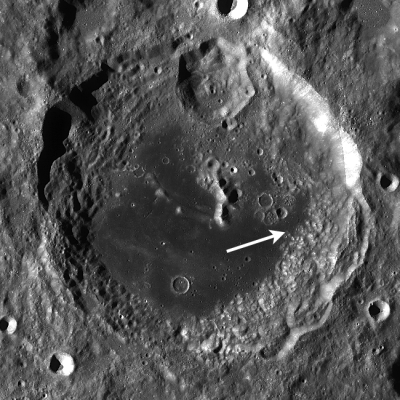 Location of wrinkle ridges within Aitken crater. LROC Wide Angle Camera mosaic displays an area 163 kilometers wide [NASA/GSFC/Arizona State University].
The dark mare basalts in the left half of the image were deformed by contractional forces into narrow, very sinuous (winding) landforms called wrinkle ridges. This pattern of deformation is not uncommon in mare basalts, and the small size of the ridges may indicate that the thickness of the volcanic fill in this area of Aitken crater is thin. The light (high albedo) material in the right half of the image is hummocky (hilly) impact ejecta. The same contractional forces that deformed the mare basalts into wrinkle ridges likely thrust up this ejecta forming analogous ridges. Wrinkle ridges are not often found outside of mare, something unusual is at work in Aitken crater! Note that the wrinkle ridge in the ejecta is more uniform in width and less sinuous than the wrinkle ridge in the mare basalt. This contrast in the two tectonic landforms may be an expression of a difference in the strength and other mechanical properties between the mare basalts and ejecta. The ejecta is most likely loose and unconsolidated, while the mare is more coherent. Thus when they are compressed they respond differently.

Search for more wrinkle ridges in the mare and highlands in the whole NAC mosaic. 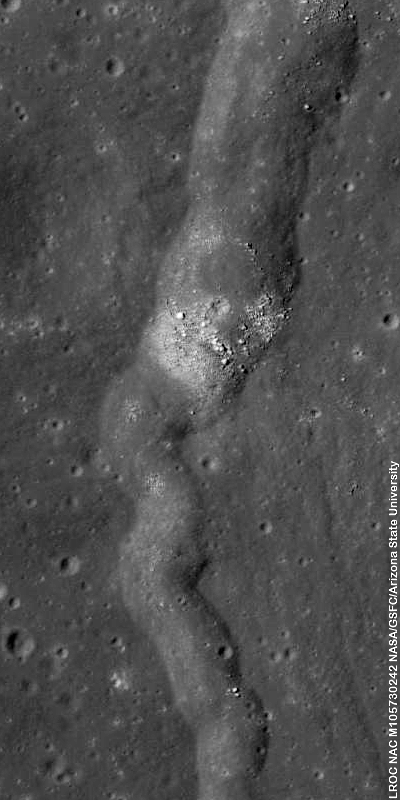 A wider view of LROC NAC M105730242 and a closer view of the slow shedding of boulders on top of a wrinkle ridge, part of the diverse morphology of Aitken's interior [NASA/GSFC/Arizona State University].
Related Posts:
Aitken's Central Peak, Seen Obliquely.
Posted by Joel Raupe at 3:43 AM