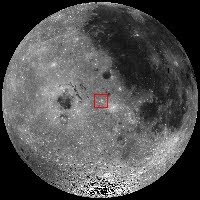 We previously published a portion of the spectacular ejecta pattern of an unnamed fresh impact crater: "Impact Art," November 21, 2013.

Today's Featured Image is a broader LROC NAC mosaic of the source where that ejecta originated. This unnamed crater does not have a circular shape, because it formed on the sloped wall of Darwin C crater (15.3 km, 20.51°S, 71.12°W).

Soon after impact, gravity took over, pulling large boulders and fine debris down the crater wall. Zooming in on the ejecta, you can see roughly boulders roughly 6 meters in size that "etched" their way down the crater wall, leaving trails in the granular ejecta as they tumbled downhill.

Since we don't have samples from this crater, we don't know exactly when this fresh impact crater occurred.  But, we can assume that it must be relatively young.

The reason why we know it must be young is that exposure to the space environment (usually referred to as space weathering) reduces the albedo of surface materials.  This means that scientists can use LROC images to get a relative sense for how long a surface has been exposed to the space environment. Getting some perspective with the wider view, combined with examination of the 643 nm normalized WAC reflectance map which enhances relative reflectance (see image below), you can see the relative brightness difference between the high-reflectance ejecta from our fresh crater compared to crater Darwin C and the rest of the surrounding terrain - this crater is not only superposes Darwin C, but its ejecta is significantly higher reflectance than anything else in the scene.

Taken together with the sharp, well-defined rims and lack of other superposed impacts, we can infer that this crater is a relatively recent addition to the lunar surface.  The impact event that formed this crater almost certainly occurred within the last several hundred million years, which is practically yesterday over the billions of years of geologic time!

Related Posts:
Impact Art
A Tangle of Talus
Bouncing, Bounding Boulders!
It's All Downhill From Here
Posted by Joel Raupe at 1:33 AM