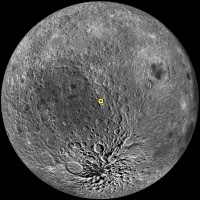 This spectacular oblique view looks from west to east across an area south of Buffon crater (45.715°S, 229.052°E) that is draped with impact ejecta from the Orientale Basin.

Orientale ejecta to have flowed over a pair of modified craters (each approximately 16 km in diameter, also see image at far bottom). Because the ejecta is superposed on top of the craters and appears to flow over much of the scene, the ejecta should be younger than the craters. However, these craters do not exhibit typical morphologies, and neither does the Orientale ejecta! Just how did this spectacular scene form?

First, the pair of prominent craters seen above have concentric, mounded or lumpy looking floors. This morphology is atypical of impact craters of this size (see Steno Q or Burg crater for more typical examples), but is reminiscent of many floor-fractured craters (such as Atlas or Komarov), which are thought to form through uplift caused by magma intruding deep beneath the surface. However, the graben seen in the examples above are more subdued those in most floor-fractured craters, suggesting that they may be blanketed by the overlying Orientale ejecta.

There is also a small pond of basalt (darker and flat) exposed just below the center on the right side of the full width image (above). This is a tell-tale sign of volcanic activity in the area, lending support to the hypothesis that the lumpy craters were modified by magma from below. This, however, does not prove which occurred first: the volcanism or the emplacement of the Orientale ejecta.

The final observation that informs the sequence of events is the occurrence of similar graben in both the crater floors and the adjacent ejecta outside the craters that is not typical of Orientale ejecta in this region. The previous post Stopped in its Tracks featured a nearby Orientale ejecta deposit located only 30 kilometers west of today's spectacular image; that ejecta is not crisscrossed by graben like those seen in the opening image above! Thus, volcanic activity in this area may have occurred after the large impact event that formed the Orientale basin around 3.8 billion years ago. However, further analysis and age dating in this area are needed before we can say for certain that the Orientale ejecta was modified (or overprinted) by younger volcanism.

Try to unravel the sequence of events on display in the full oblique image, HERE.