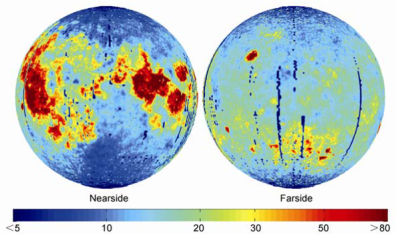 An improved, if unoriginal, global map of Helium-3 distribution on the lunar surface, based on the distribution of ferrous titanium oxides observed by China's Chang'E lunar orbiters, released in 2010 [CNSA/CLEP].
People's Daily Online

Under China's three-phase lunar probe plans for orbiting the moon, landing on the moon and returning back to Earth, China is scheduled to launch the Chang'e-3 and softly land it on the moon, where it will release a moon rover to explore the lunar surface, by 2013.

Ouyang made the remarks during the opening ceremony of the 2011 IEEE International Conference on Robotics and Automation.

He said that the Chang'e-2 has operated safely for 200 days as of May 1. During the operation of the Chang'e-2 in space, four tiny cameras on the satellite recorded clear photographs, marking China's first-ever aerospace application of CMOS imaging technologies, first space surveillance engineering application, first photograph captured at the moment of igniting the 490N engine and first photograph of the Earth taken by a camera on an orbiting lunar orbiter.

For instance, the Chang'e-2 can either make a "pilot" soft-landing in order to test technologies for the Chang'e-3 or return to Earth orbit under ground control and simulate the return of future Chang'e series satellites to earth after 2013.

Ouyang said that the Chang'e-3 will be equipped with a 70-kilogram lander and a 120-kilogram moon rover. The satellite will weigh about 500 kilograms and will have a designed life of three months. As the intelligent robotic technology develops, the rover will be able to determine its own routes, climb slopes, avoid obstacles and pick a good spot to perform science experiments with a collection of sensors. Furthermore, it will even be capable of collecting samples from the moon and sending them back to Earth for further studies.

Ouyang said that China plans to send recoverable rovers and humans to the moon at appropriate times. In addition, China is also considering building a research base on the moon and exploring Mars and other parts of outer space. To achieve its goal, the country is building a new satellite launch center and is making great efforts to develop more advanced rocket engines.
Posted by Joel Raupe at 10:36 AM

The "ferrous titanium oxides" reminded me of some research I'd done in North Creek, NY. In the Adirondacks were the titanium oxide mines at Tahawas. An older 19th century iron foundry was nearby and found the "titaniferous magnitite" difficult and was later researched. It's said the tanks in WWII in Europe were painted with it to camo them in snow. The State of NY recently did some restoration work in the "ghost" village of "Adirondac". Henry Ford wanted to buy it for auto production. During WWII rail was laid up to the mines from the North Creek garnet mine railhead and the "world's largest titanium mine" was in operation until the 1960s. It is also where then VP Teddy Roosevelt was first sworn in as President after the death of William McKinley. A St. Joseph native American had led explorers to a dam described as all iron.