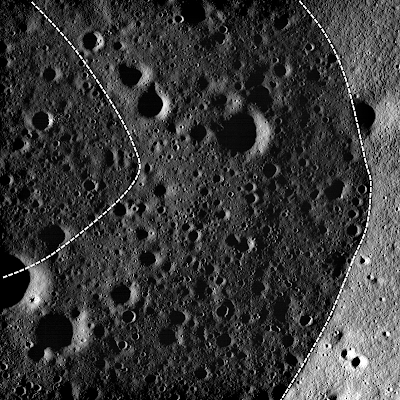 LROC Narrow-Angle Camera (NAC) view of a part of the lava terrace within the Bowditch formation. The wall of Bowditch is on the right and the terrace is located between the two dashed white lines. LROC NAC early Commission phase observation M101478053R, LRO orbit 176, July 9, 2009; field of view 2400 meters with a solar incidence angle of 86° [NASA/GSFC/Arizona State University].
Sarah Braden
LROC News System 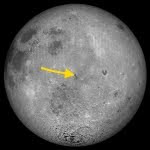 Bowditch (25.0°S, 103.1°E) is an irregularly-shaped depression northwest of Lacus Solitudinis. Inside Bowditch is a "ring" that resembles a dirty bathtub. Much like water in a bathtub, this ring is a marker of the highest level of liquid lava within Bowditch. The Bowditch depression filled with lava like many craters on the Moon, and as the lava cooled and solidified, it subsided into the center of the depression. The ring is the remnant from this activity. NAC images give us further evidence of lava cooling, contraction, and subsidence in the mare. We do not know if drainage or contraction during cooling causes lava terraces like Bowditch, but these new images should provide us with more clues. Check out Apollo era images of the Bowditch feature at the Apollo Image of the Week site. 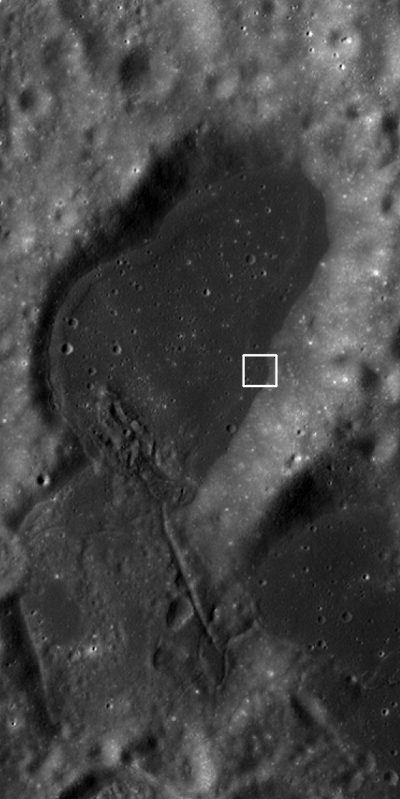 In this 100 meter pixel LROC WAC mosaic Bowditch is the irregularly-shaped mare-filled depression. The lava terraces are clearly visible all the way around the rim of Bowditch. The white box marks the area in the featured NAC image above [NASA/GSFC/Arizona State University].
View the full LROC NAC frame! 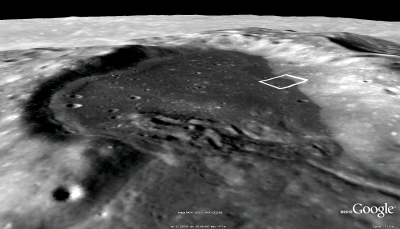 Deflecting the LROC Wide-Angle Camera mosaic with some degree of tri-dimensionality, the context for the close-up of the Bowditch "bathtub ring" seen fixed on the lunar digital elevation model available in the Google Earth application (>v.5).
Posted by Joel Raupe at 2:10 PM