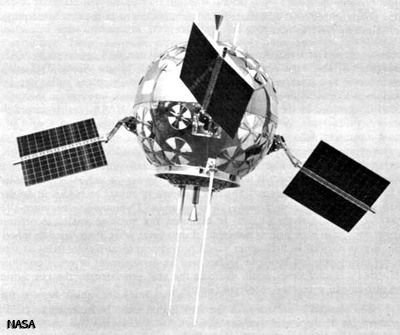 STL (TRW) - built Able-4 and 5 lunar orbiters were the most advanced American spacecraft of their time, part of the ARPA-sponsored Operation Mona, which was approved by President Eisenhower on March 27, 1958 [NASA].
Andrew J. LaPage
The Space Review

There has been a resurgence in interest in the exploration of the Moon. In addition to current American efforts, Japan, India, and China have placed spacecraft into orbit around the Moon in recent years and they have plans to land on the lunar surface in the future. A genuine competition between the Asian space powers is developing to exploit the Moon and its resources. The success of these programs owes much to the experience gained during the competition between the Soviet Union and the United States a half a century ago in the opening years of the Space Age.

Before NASA was founded on October 1, 1958, the US Air Force had ambitious plans for space exploration. During the national debate that followed the launch of Sputnik, the Air Force was trying to position itself so that it could dominate the nation’s infant space program. Even after the Advanced Research Projects Agency (ARPA) was founded in February of 1958 and was given the task of coordinating America’s military space programs, Air Force efforts and plans figured prominently.

By the fall of 1959, the Able combination along with its cousin, the Vanguard upper stages, had an abysmal performance record.

The Air Force’s first step beyond Earth orbit, called Project Able, was a series of attempts to place a small spacecraft into orbit around the Moon. These orbiters, along with a pair of small US Army-JPL lunar flyby probes, were part of the ARPA-sponsored Operation Mona, which was approved by President Dwight Eisenhower on March 27, 1958. Three launch attempts made by the Air Force between August and November of 1958, now called Pioneers 0, 1, and 2; all failed to reach the Moon. But even before these missions flew, the Air Force, in conjunction with the builders of their first lunar orbiters, STL (Space Technology Laboratory, a division of TRW), began to study follow-on missions not only to lunar orbit but also to Venus, given priority. Little was known about Earth’s near twin at this time and many believed Venus ranked with Mars as a likely abode for extraterrestrial life, making it a desirable target for exploration.

Read the article, HERE.
Posted by Joel Raupe at 7:17 PM