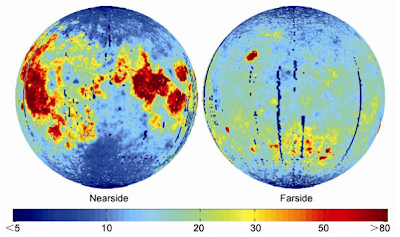 An interpolation of the total amount of Helium-3 per square meter "fixed" in the lunar regolith (ppb/m2), from "Global inventory of Helium-3 in lunar regoliths estimated by a multi-channel microwave radiometer on the Chang-E 1 lunar satellite," F. WenZhe, et al., Chinese Science Bulletin, December 2010, Vol. LV, No.35. Scarce on Earth, Helium-3 is a strategic ionized element and projected future source of clean energy. Likely a bi-product of solar incidence, as interesting as it's interpolated abundance in nearside mares Tranquillitatis, Fecunditatis and Oceanus Procellarum is it's apparent lack in similar landscapes. While the methods used to indirectly locate and map Helium-3 on the Moon is not new, the study may be of the highest resolution ever publicly released, Point HERE for a full-resolution view [Fudan University/Institut de Physique du Globe de Paris].

Helium-3 (3He) implanted by solar wind in the lunar regolith is a valuable resource because of its potential as a fusion fuel. On the basis of the Apollo regolith samples, a linear relationship between 3He abundance and solar wind flux, optical maturity and TiO2 content has been presented. China successfully launched its first lunar exploration satellite Chang-E 1 (CE-1) on October 24, 2007. A multi-channeled microwave radiometer was aboard the satellite with the purpose of measuring microwave thermal emission from the lunar surface layer. From the multi-channel brightness temperature (Tb) observed by CE-1, the global distribution of the regolith thickness was inverted from the multi-channel Tb, and was used to evaluate the total amount of 3He per unit area in the lunar regolith. The global inventory of 3He was estimated as being 6.6×108 kg; 3.7×108 kg for the lunar nearside and 2.9×108 kg for the lunar farside.

Helium-3 (3He) is a clean, safe and non-radioactive fusion fuel. Compared with traditional fusion reaction of using 3H, the reaction involving 3He does not generate any high-energy neutrons and does not produce prolonged radioactivity, and hence is not dangerous to a reactor or the environment.

Terrestrial sources of 3He are extremely rare and the total inventory is only about 2.0×104 kg. Because there is neither a geomagnetic field nor an atmosphere on the Moon, solar wind particles can impinge directly upon the lunar surface and hence be captured by lunar regolith particles. As a consequence, a significant amount of solar wind elements (such as helium) have accumulated in the regolith during the long geological history of the Moon.

Significant work has been done to estimate the 3He implantation and abundance in the lunar regolith during the last few decades, based on the returned regolith samples from the Apollo and Luna missions. However, there has been a need to have a precise lunar regolith thickness distribution map of the whole lunar surface to determine the quantities of 3He present.

China successfully launched its first lunar exploration satellite Chang-E 1 (CE-1) on October 24, 2007. A multichannel microwave radiometer was aboard the satellite and had the purpose of measuring microwave thermal emissions from the lunar surface layer. From the analysis of the primary CE-1 observations, consisting of the brightness temperature (Tb) (from November 2007 to February 2008), Fa and Jin successfully inverted the global distribution of regolith thickness. This newly acquired dataset provided an opportunity to quantitatively estimate the global inventory of the 3He accumulated in the whole regolith.

In this study, by combining the models of normalized solar wind flux over the lunar surface, the global distribution of TiO2 content and the surface optical maturity derived from Clementine UVVIS multi-spectral data, a linear relationship between 3He abundance, TiO2 content and surface optical maturity can be derived for the global distribution of 3He in the lunar near-surface layer (thickness less than 1 μm). Using the newly acquired global distribution of the regolith thickness obtained from CE-1 multi-channel radiometer observations, the total amount of 3He per unit area in lunar regolith can then be obtained.