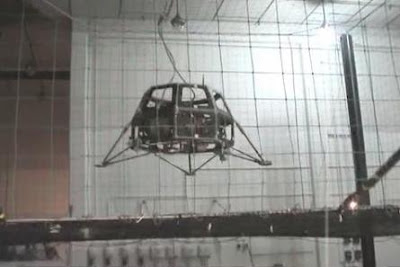 The specter of "nuclear powered" lunar landers is being raised, though Radioactive Thermal Generators (RTG's) have been a vital part of NASA's successes, from the Moon to the farthest flung Voyagers still transmitting data from Interstellar Space thirty years after their launch.

Each Apollo lunar landing carried RTG's, Plutonium decay powered generators to power years worth of experiments on the Moon, left behind at all six landing sites. NASA is committed to launching the Lunar Atmosphere Dust and Exosphere Explorer, in 2011, and afterward at least eight landers as part of the International Lunar Network. NASA is considering RTG's to power these important surface experiments through the two-week lunar night.

But, it's looking for high and low for alternatives, even RTG's powered by something a little less "hot" than Plutonium.

Rob Coppinger, over at FlightGlobal Hyperbola has a great outline of the particulars.

At Saturn, the Cassini explorer has just completed its primary mission. It's hard to remember the terror raised by the fashionably anti-nuke crowd, a decade ago, when Cassini was first launched. A small band of protestors threatened to toss themselves under a bus, to stop the launch, originally planned as a payload on-board the Space Shuttle. The crowd was quite a bit smaller in December 1997 than those that showed up to protest Galileo's launch to Jupiter.

Solar power just won't cut the mustard much past Mars, outside the inner solar system. Cassini's long, flawless tour and mission at Saturn just wouldn't have been possible without RTG power, and neither would fantastic data and photographs, like the ones taken this week as it flew sixteen miles through the Ice Fountains of Enceladus.

New Horizons, speeding toward its way toward it's encounter with the remarkable Four-Body System Kuiper Belt Object formally known as "the Planet Pluto," in 2015, would already be a cold chunk of solid waste, out past Saturn now.

It's laudatory to know NASA's looking at alternatives for powering the essential ILN. Before extended human activity on the Moon can begin, we will have learned more about the Moon in the next few years than during the last three decades. The Russians still deny splattering a RTG Mars probe in the Andes, rather than the South Pacific, many years ago. The Rock collector who comes up on that wreckage may not live to tell about it.

In order to find and test safer atomic technologies, eventually 3He or Thorium plants in situ on the Moon, we're going to have to make some trade offs. Either that, or we can all stay home and grow corn.
Posted by Joel Raupe at 4:59 PM