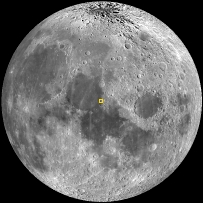 The interior wall of the Clerke crater has many distinct flows of granular material which narrow as they reach towards the floor of the crater. The source material originates from the crater rim. The debris appear higher in reflectance compared to the rest of the crater wall, likely due to differences in maturity and perhaps grain size of the material.

The debris flows may be younger than the crater floor and walls if the flow was instigated by seismic shaking or a nearby impact crater. The flow may contain more boulders, which may cause the higher reflectance.

Agnes Mary Clerke was key in increasing public interest in astronomy and astrophysics. She wrote the book A Popular History of Astronomy During the Nineteenth Century (published in 1885), which was written for the non-astronomer. This publication brought her recognition from the astronomy community. Later she wrote Problems in Astrophysics which described her ideas on the direction for future research involving the Sun, stars, and nebulae. Ms. Clerke possessed a great ability to synthesize research results, look at the "big picture" of science, and communicate those ideas to the public as well as scientists. She was elected an honorary member of the Royal Astronomical Society, and an award given (at the time) to only three other women: Caroline Herschel, Mary Somerville, and Margaret Lindsay Huggins.

Explore the rest of Clerke crater and the surrounding area in the full NAC, HERE.