On the edge of Lichtenberg 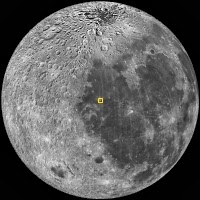 
Lichtenberg crater (19 kilometers in diameter) is located in western Oceanus Procellarum (31.85°N, 292.28°E). Originally thought to be Copernican in age due to its visible ray system,

Lichtenberg is now thought to be Eratosthenian in age. It turns out that Lichtenberg rays are highly reflective due to their composition and not their relative youth (compositional ray vs maturity ray). Today's Featured Image is an oblique view of Lichtenberg crater and the surrounding terrain. Oblique images are similar to what an astronaut in orbit around the Moon would see looking out a window towards the horizon, and these views are different than most of the LROC NAC images that are taken at nadir (looking straight down).

Because oblique images are taken by looking at an angle, these images can enhance or reveal features that may not be evident when looking straight down. For example, Lichtenberg's raised rim is prominent in this image, as is the topographic high within the ghost crater beside it. The diameter of the ghost crater (29 kilometers) suggests that it is a complex crater with a central peak that was subsequently buried by mare basalts. Perhaps a now deeply buried central peak is reflected in the surface as a distinct topographic high in the center of the ghost crater? It is the presence of this flooded crater that caused Lichtenberg to form in an asymmetrical fashion. This viewing geometry also enhances Lichtenberg's textured ejecta blanket, revealing a partial embayment of the ejecta on the eastern side. By applying our understanding of the principles of stratigraphy, the history of this area can be unraveled. A complex crater formed on the surface and was buried by mare basalt. Then, Lichtenberg formed on part of the partially buried rim of the ghost crater. Finally, a new flow of mare basalt partially flooded the ejecta of Lichtenberg.