The latest destination for human spaceflight?


Of all the idiocies that make up our current lack of a genuine policy for civil space, the imperative to find some destination that is not the Moon is the most telling sign of an absence of thoughtful leadership.  For an example of the pointlessness to which this reasoning can go, take a look at a recent post at Scientific American, arguing for a human flyby mission to Venus.


That’s right – Venus.  The planet that makes Jupiter’s moon Io look like an island in the Bahamas.  That locale of sea-bottom pressures, lead-melting temperatures and sulfuric acid rain.  Specially built robotic devices last for (at best) an hour or two before breaking down into an inert lump of metal.  This place is now being advocated (seriously) as a destination for human spaceflight.  How did we arrive at such a state?


Simple – by a deliberate act of programmatic destruction.  The Moon was to be our first destination on the long road into the Solar System.  But that goal was discarded, allegedly on the grounds that “we’ve been there,” but in reality because it was a destination that could be reached on reasonable timescales for affordable amounts of spending.  Thus, a failure to return to the Moon could not be blamed on factors other than program mismanagement or agency incompetence.  In other words, it was a realistic goal against which progress could be assessed.


What replaced lunar return?  That’s a bit more muddled, but vague notions were advanced that human missions “beyond low Earth orbit” could be undertaken only if NASA was freed from the onerous requirement to build new spacecraft and launch vehicles.  Thus, we would purchase commercial launch services for delivery of people and payload to LEO and use the agency budget to develop “new and exciting technologies” to make more distant goals reachable.


As this proposed pseudo-policy played itself out over the ensuing months, its essential hollowness became ever more apparent.  Despite the quasi-religious beliefs of some space buffs, there is no “magic beans” technology to make spaceflight infinitely cheap and infinitely capable.  There is no commercial human spaceflight industry.  And other than the now-discarded lunar surface, there is no worthwhile human destination reachable within the next 15 years.


The real need for Venus is to get high-resolution radar images and gravity data of the planet to extend and supplement the reconnaissance mapping of the Venera and Magellan missions of the past century.

To get such high-quality image data, one must put a spacecraft into orbit around Venus.  This is a fairly straightforward task for a robotic mission; you can use the atmosphere of Venus to aerobrake, which will gradually slow the spacecraft down and allow it to slip into orbit.  The problem is not getting into orbit around Venus – it’s getting out of it.  Venus is a large planet (almost as big as the Earth) and it takes significant energy to achieve escape velocity.  With a robotic spacecraft, we don’t worry about that because there is no need to return it to Earth.  I suspect that a human crew might feel differently about such a proposition.


In plain fact, there is nothing of any real scientific value that a human crew can do during a few-minutes-long flyby encounter with Venus.  So we are talking about undertaking a months-long trip through interplanetary space, fully exposed to cosmic radiation and solar particle events, for a momentary view of an extremely hot planet of bright, featureless cloud tops.


Space advocates are desperately looking for something people can do and somewhere they can go in space on timescales of less than multiple decades at costs of less than hundreds of billions of dollars.  If only there where some place we could get to within a decade or so, for a cost that doesn’t bust the latest budget.  If only there was a destination in space where human judgment, knowledge and expertise would play a real time critical role in mission success and where new capability would be realized. 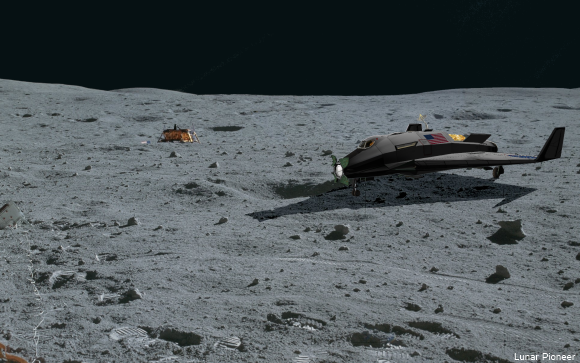 Originally published December 1, 2011 at his Smithsonian Air & Space blog The Once and Future Moon, Dr. Spudis is a senior staff scientist at the Lunar and Planetary Institute. The opinions expressed are those of the author and are better informed than average.
Posted by Joel Raupe at 12:40 PM