Simulated view of the Tranquility Pit 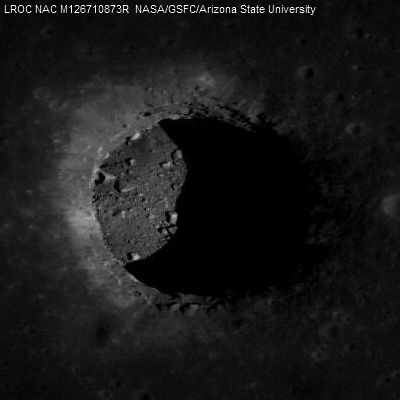 The second of four LROC Narrow Angle Camera (NAC) close-ups (M126710873R) of the estimated 100 meter-wide mouth of the cavern skylight in Mare Tranquillitatis (8.34°N, 33.22°E). The Sun was shining 63° above the east by southeastern horizon as LRO flew almost precisely overhead at an altitude of 40.57 kilometers, during orbit 3807, April 24, 2010. As follow-up observations accumulate tighter constraints on the dimensions of the "crater pit," one of only three discovered on the Moon since 2008, become possible [NASA/GSFC/Arizona State University]. 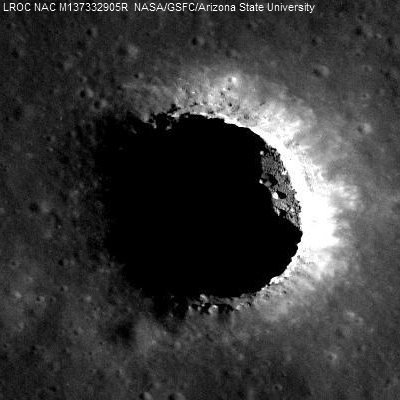 Four months on, as the Moon continued to rotate eastward under LRO's polar orbit, the Tranquility Pit once again arrived in a favorable location for LROC observation, 45.41 kilometers under the opposite side of LRO orbit 5372. The encounter was not as precisely overhead as back in April, on August 24. LRO was commanded to slew some 7° off nadir while the Sun's illumination arrived on target from 52.62° over the west-southwest. This third of the four LROC NAC imaging opportunities revealed a different area of the cavern's interior and the eastern rough, bright wall of the skylight. (LROC NAC M137332905R [NASA/GSFC/Arizona State University]. 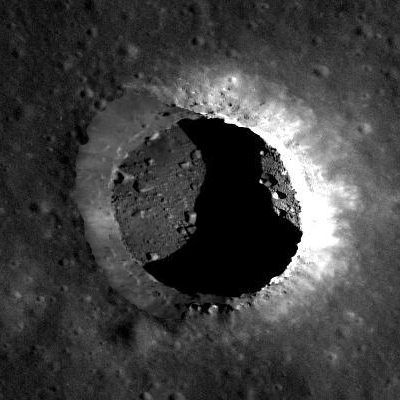 This very rough juxtaposition of the two observations above allows a view of the cavern opening's anatomy otherwise impossible in an almost total absence of the kind of scattered light taken for granted on Earth [NASA/GSFC/Arizona State University].
Posted by Joel Raupe at 9:44 PM

Selene, with its pictures of Shackleton crater, showed that light scattered from the rim of shadowed regions can be enough to see permanently shadowed regions - see http://lunarnetworks.blogspot.com/2008/10/kaguya-unveils-shackletons-depths.html

Now, the bottoms of these skylights have direct line of sight to the lip, and so should be similarly illuminated by reflected sunlight. If LROC has enough dynamic range, it could take a long exposure and bring out the complete bottom of the sinkhole, and also a little of the underhang.