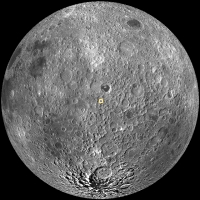 While the total energy of an impact depends on the projectile velocity and mass, low-angle (oblique) impacts can distribute this energy in ways that differ from that of a higher angle trajectory.

By definition oblique impacts strike at an angle of 15° or less, producing something more akin to a 'glancing blow' rather than a 'hard smack,' and often result in asymmetrical 'wing-shaped' ejecta patterns.

Based on the ejecta surrounding this small feature in Neujmin crater in the lunar farside highlands, a case can be made for a southwestern approach from the impacting object. Debris was tossed in the down-track direction and splayed at right angles to the flight path on either side. The ejecta is actually quite symmetrical with respect to this flight axis (axial symmetry). The notion of asymmetry really applies to rotational symmetry in the case of many oblique impacts.


The full NAC frame can be explored HERE.

Additional examples of oblique impacts are available in the Featured Image browse gallery, including "Not Your Average Crater," "A Tiny, Glancing Blow," and "Crash or Coincidence?"
Posted by Joel Raupe at 8:14 PM