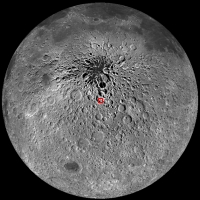 
Karpinskiy crater, at 72.609°N, 166.801°E and (officially 91.403 km) in diameter, rests within a larger and far older unnamed crater. How do we know which crater is older? Stratigraphic studies, or the study of superposition of rock layers (or in this case, craters), will help determine the relative ages of craters here. Geologists derive relative ages between geological features by observing how they overlap - young formations will always overlie older formations, and on airless bodies, such as the Moon and Mercury, this method becomes particularly useful. Without wind to erode its surface, only four factors affect the lunar surface: space weathering, impacts, tectonism, and volcanic resurfacing. With respect to today’s Featured Image, the Moon accumulates impact craters over time. From the cratering record we can investigate not only stratigraphic relationships (which crater formed first), but we can also derive a quantifiable measure, or crater density, to determine relative ages on the Moon.

Today’s Featured Image is a great example for stratigraphic studies. The LROC WAC mosaic of Karpinskiy crater overlaid with the GLD100 color topography presents a clearer outline of the older crater (WAC mosaic below). The top portion of the image is black because the GLD100 product does not have coverage at that latitude (>79°N). Karpinskiy crater is located inside a much older, degraded crater that does not have a well-defined rim and is somewhat difficult to see in the WAC mosaic. Karpinskiy is younger because it superposes, or formed on top, of the unnamed older crater. There are younger craters superposed on the floor of Karpinskiy, that must have formed later and are therefore younger based on the relative age relationships. Thus, using stratigraphic relations we are able to derive a relative age for Karpinskiy, but what if we want to determine the absolute age? The number of craters that formed on Karpinskiy can be used to estimate its absolute age, however with such a small area the crater size frequency distribution absolute age estimate has a large uncertainty. To accurately determine the absolute age of Karpinskiy crater we have to go there and acquire samples of impact melt rock that we can radiometrically date!

it's actually a fantastic article, i really like the photos. Thank you for discussing this kind of bookmarking your website as we speak hehe Male Masturbators