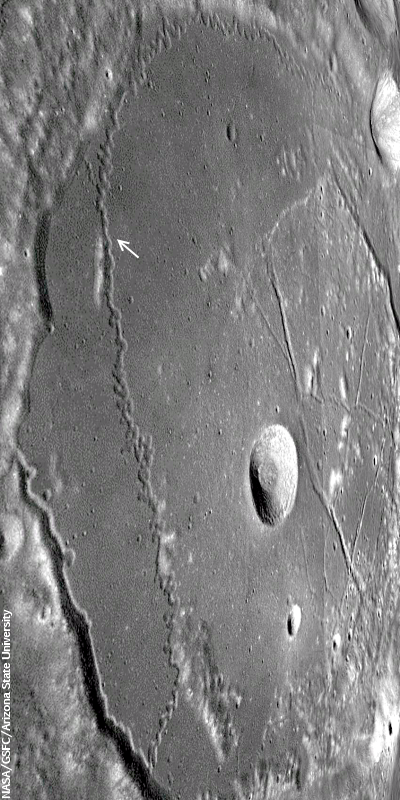 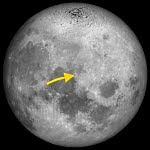 Sinuous rilles are remarkable features resulting from turbulent flow of low viscosity (very fluid), high temperature lavas that erodes the pre-existing surface. In turbulent fluid flows, eddies and vortices form that can be highly erosive and result in the twists and turns seen in many rilles. This rille, located on the western edge of Posidonius crater (~100 km diameter, floor-fractured and partially mare-filled), tightly winds against the northern crater wall and then veers away in a southerly course. 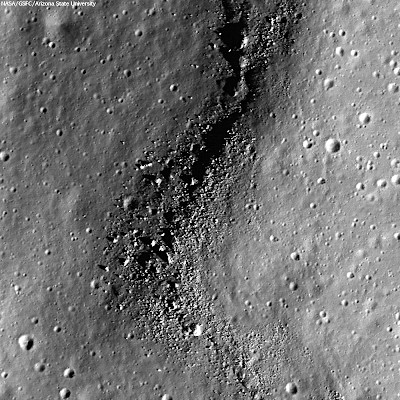 LROC Narrow Angle Camera close-up view of boulders, derived from the mare lavas that flooded the crater, outcropping from the eastern rille wall. The rille itself runs on the left of the shedding rock. LROC NAC observation M113771795R, LRO orbit 1900, November 25, 2009; field of view above is 500 meters [NASA/GSFC/Arizona State University].
Why are scientists captivated by sinuous rilles? Part of the reason is purely aesthetic - each sinuous rille is different. Some sinuous rilles are less curvy, some - like Rimae Posidonius - look like squiggles, while yet other rilles are so windy that they have horseshoe-shaped curves. Scientifically, however, sinuous rilles are exciting because it's possible to see layers of mare lavas that were cut through during the rille formation - as long as the regolith slumping down the walls isn't thick enough to obscure them! Besides exposing layers in the lava flows, rilles also give you an almost dynamic look at where lava flowed, suggesting very high effusion rates over long periods of time (often much higher than typical of those on Earth). Some rilles are believed to contain pyroclastics, which can tell scientists something about the volcanic history of the rille. Sinuous rilles in the Rimae Prinz region of the Moon may even host a lava tube network; lava tubes may be instrumental in future human exploration activities.

What do you think is most scientifically fascinating about sinuous rilles? Discover the winding turns of this sinuous rille in the LROC WAC mosaic and in the full LROC NAC image!
Related posts:
Marius Hills
Aristarchus Plateau 1: Amazing Geologic Diversity
Rille within a rille! 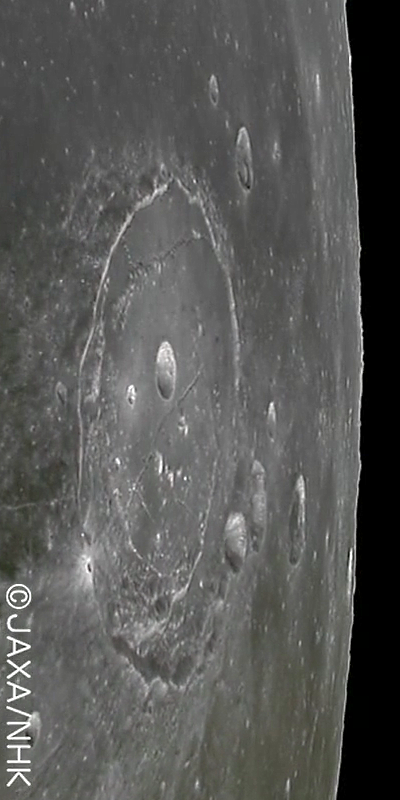 HDTV still from Japan's SELENE-1 (Kaguya) in 2008 shows Posidonius and Rimae Posidonius in natural color, but without much more clarity than what can regularly be imaged of this area on the northeastern edge of Mare Serenitatis from Earth. Nevertheless, the Kaguya mission provided unparalleled science along with views of the Moon previously available only to Apollo's astronauts, along with original views never seen before, like the permanently shadowed interior of Shackleton crater at the Moon's south pole [JAXA/NHK/SELENE].
Posted by Joel Raupe at 9:30 PM