Still a beta version, the LROC Team is asking for your comments, suggestions and feedback on the Lunar Reconnaissance Orbiter Camera LROC :: ACT-REACT Quick Map. 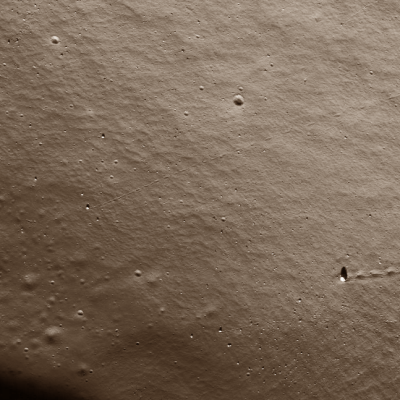 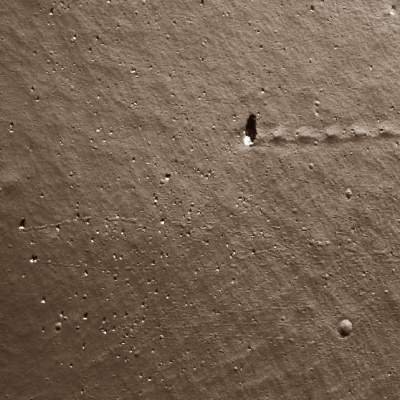 Among the many places on the Moon we're patiently waiting to see through the unprecedented array on-board LRO, including a high-resolution LROC Narrow Angle Camera (NAC) glance into the depths of the crater within Antoniadi now confidently believed to be the lowest point on the Moon (very near 70.38°S, 187.2°E), over 9,000 meters below global mean elevation.

In of itself we've never expected to see anything unremarkable at that location, and there are other sites we're hoping to see that are still not in the admittedly enormous amount of LROC data already cataloged and available online.

LROC principal investigator Mark Robinson and his team at Arizona State University has, however, recently given the world's planetary science enthusiasts another new tool.

Every three months, with the publishing of another the newest big volume of LROC photographs to the Planetary Data System, we a handful of sites, a few of them already well-surveyed, and many not given the attention we anticipate, to see what's new.

That job may become much easier with the Quick Map, which, like the Lunar Orbiter and Clementine imagery available through Map-A-Planet interface maintained by the Astrogeology section of the United States Geologic Survey (USGS), begins with a equidistant cylindrical map of the Moon. Clicking your way toward a feature, and seeing many NAC observation frames layered over the LROC WAC monochrome mosaic pulls the user in from far above the Moon to full resolution.

After the release of LRO's Lunar Orbital Laser Altimeter (LOLA) Featured Image of Antoniadi Crater, after already using the nearly-as-new LROC Global WAC Viewer to get a closer look at the obscure but still very discernible outlines of Mare Australe, we used that same Viewer also to examine close-up Antoniadi through the LROC WAC Mosaic Viewer, hoping to compare the detail with what had, not long ago, also been photographed by Japan's Kaguya, using that vehicle's instruments.

We weren't disappointed at all, and yet the really deep spot in Antoniadi is now reliably measured at the bottom of the unnamed largest crater (diameter 11.2 km) within Antoniadi we've long informally been referring to as "Antoniadi A." 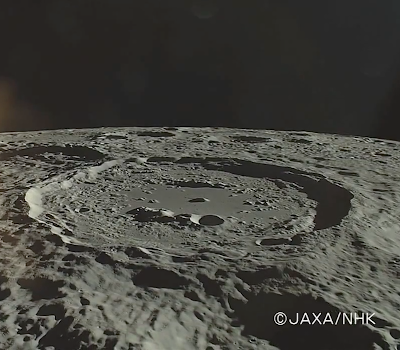 Antoniadi - seen through the High-Definition Television camera on-board Japan's SELENE-1 orbiter "Kaguya" in 2007. The informally-named 11 kilometer-wide simple crater inside the southern interior is Antoniadi A, confirmed now as host of the deepest elevations on the lunar surface [JAXA/NHK/SELENE].
Unfortunately, the deepest parts of Antoniadi A's interior, usually stay in deep shade. Antoniadi is almost a southern circumpolar feature, where shadows are always long and enduring. It's a long way from any permanently shadowed region, which makes capturing its deep spots particularly difficult. LRO would have to be engaged in capturing "Targets of Opportunity" while flying over Antoniadi at local High Noon, and then, because of the low latitude, the north interior would still be in shadow.

Is this the bottom, or at least half the bottom interior of "Antoniadi A," the lowest place on the lunar surface? Other data seem to show, hardly unusual for lunar craters, that the very bottom of "Antoniadi A" is not evenly distributed. But it's certainly one of the lowest spots, if not "the lowest." Elephant Skin mottling in the distribution of dust that some think is indicative of "grades" as opposed to even elevation seems to come to a halt close to the ends of boulder trails. 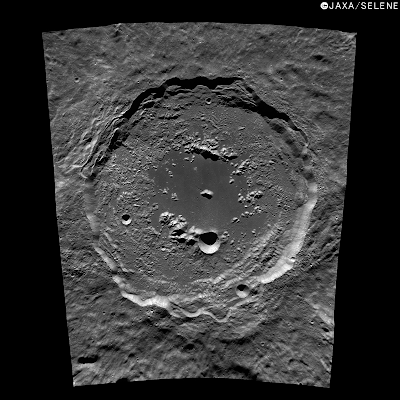 Antoniadi in a monochrome image assembled from data collected using Kaguya's Terrain Camera. See the image at its original resolution, HERE [JAXA/SELENE].
The only improvement in this phenomenal Quick Map one might ask for, at this point, is a non-obtrusive lable naming the NAC observation, making it possible to cross-reference the particulars of the meets and bounds of the observation's fundamentals. But, no matter.
This new tool may not give you access to the entire catalog yet, but we're definitely not complaining. No one's gotten this close to the lunar surface since Cernan & Schmitt in 1972.

The first image was collected from the ACT-REACT Quick Map Equidistant Cylindrical projection, and is slightly corrected for the foreshortening; the second from the Orthographic Map of the South Pole region also available through what should be an "award-winning" new feature made available by the conscientious LROC team.
Posted by Joel Raupe at 8:29 PM

This tool is absolutely fantastic! Searching the Lunar terrain is made easy as you can get both a macro view of the search area of interest as well as a more detailed view through the photo strip footprints,with both options working simultaneously for orientation.

The image views are absolutely stunning and the navigation controls very user friendly. The ability to capture the area of interest with the "permalink" button and copy and paste the url for future reference is a winner.

An excellent piece of work. Examining the moon has suddenly become so much easier and the ability to view the NAC strips in relation the surrounding area is a great help.

My thanks and congratulations to all those invoved.

Hey can you tell me What is I,E,P in reflectance data of m3