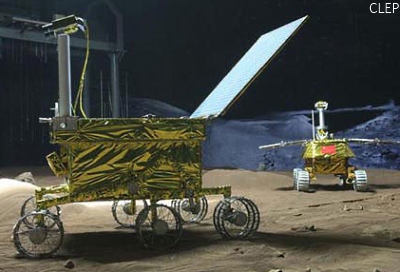 Preliminary concept models of the CNSA Chang'E-3 lunar rover vehicle, which may be deployed after a landing in Sinus Iridium in 2013 [CNSA/CLEP].
Yan Meng
People's Daily Online

The Chang'e-3 lunar probe has entered the prototype development stage, and it will be launched in 2013 at the Xichang Satellite Launch Center on a mission to achieve a soft landing on the moon's surface, said Ye Peijian, chief scientist of deep space exploration at the China Academy of Space Technology.

He said that the Chang'e-3 lunar probe with "legs" and wheels is a brand-new spacecraft for China, so the technology is difficult to master.

"The biggest difficulty of the Chang'e-3 is how to land on the lunar surface steadily," Ye said.

Ye said it must be a soft landing, not a hard hit. A soft landing cannot use a parachute because there is a vacuum on the moon. The probe will instead use anti-thrust to slow down the speed of the engine.

Ye said that there are five landing sites that have been pre-selected for Chang'e-3 lunar probe. Sinus Iridum is the first choice in the first task because it is a flat region that is well-lit and easily observable.

Ye Peijian said the Chang'e-3 lander will carry seven sets of scientific instruments and several cameras to conduct different scientific exploration missions as well as take photos of the Earth and other celestial bodies.

The lunar rover will also have eight instruments, including a panoramic camera and lunar exploration radar. The lunar rover will use automated navigation, turning, route selection, climbing and obstacle avoidance and then transmit the data back to Earth by itself or through the lander.

According to reports, after the launch of Chang'e-3, the Chang'e-4 lunar probe will also be launched. The Chang'e-3 and Chang'e-4 will together complete the task of landing on the moon in the second phase of China's lunar exploration, which is the implementation of a lunar soft landing and automatic inspections investigation. 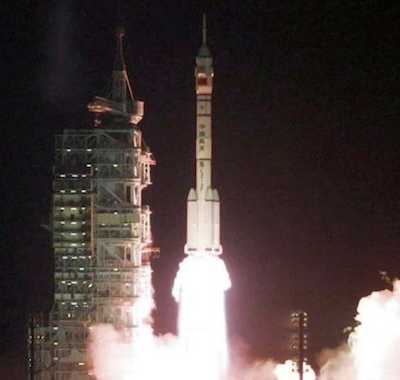 The U.S.-Russian space race that led to the Apollo lunar landings is the stuff of legend. But now a new race is emerging, as China gears up with the world's biggest rocket-production factory. And we're not talking about fireworks.

Early rockets were based on old Russian designs, but China's space industry has developed extraordinarily quickly since then. Chinese science and engineering teams launched an astronaut on the Shenzhou V mission in late 2003, then completed a spacewalk in 2008 on the Shenzhou 7 launch (see the video below). Though much of the nation's space efforts are shrouded in mystery, the deputy head of the Academy of Launch Vehicle Technology just revealed that the world's biggest facility for designing, building, and testing rockets is under construction in the Tianjin area of northern China.
Read the article HERE.
Posted by Joel Raupe at 2:32 AM