A most partial eclipse begins 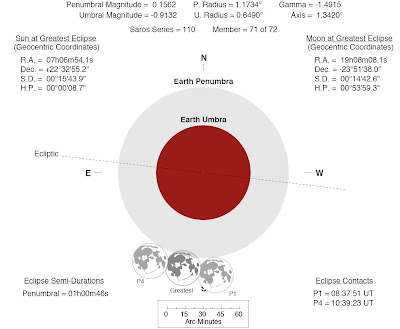 The very partial eclipse, a dim in illumination over the far north of July's Full Moon, starting about an hour and a half, will be undetectable to the human eye.

The first of a much ballyhooed "triple eclipse," this morning's Partial eclipse of the Moon channels the narrow range of such phenomena ending in August by one equally as imperceptible over the Moon's far south at the Full Moon in August. The two extremes of possible partials almost insures a deep eclipse of the Sun visible somewhere on the Earth during the next New Moon on July 22, visible from India to the South Pacific.

Details about these phenomena can be read about HERE.
Posted by Joel Raupe at 7:51 AM