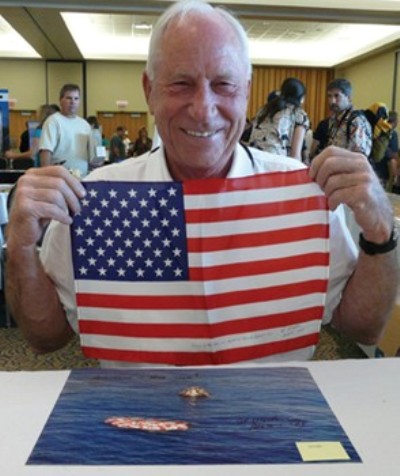 Apollo 15 command module pilot Al Worden displays a flag which, like himself, was flown to the Moon. On the return leg of the record-setting trip, Worden performed the first space walk in Deep Space, over 200,000 kilometers out from re-entry, half-way between Moon and Earth, to retrieve photographic canisters on the service module.
Hat Tip to Klaus Schmidt Space Fellowship

NASA will honor Apollo astronaut Al Worden with the presentation of an Ambassador of Exploration Award for his contributions to the U.S. space program.

Worden will receive the award during a ceremony Thursday, July 30, at 4 p.m. EDT. The ceremony will be held at the Apollo Saturn V Center at NASA’s Kennedy Space Center Visitor Complex in Florida, where the moon rock will be displayed.

NASA is giving the Ambassador of Exploration Award to the first generation of explorers in the Mercury, Gemini and Apollo space programs for realizing America’s goal of going to the moon. The award is a moon rock encased in Lucite, mounted for public display. The rock is part of the 842 pounds of lunar samples collected during six Apollo expeditions from 1969 to 1972. Those astronauts who receive the award will then present the award to a museum of their choice, where the moon rock will be placed for public display.

Worden served as command module pilot for the Apollo 15 mission, which set several moon records for NASA, including the longest lunar surface stay time, the longest lunar extravehicular activity and the first use of a lunar roving vehicle. Worden spent 38 minutes in a spacewalk outside the command module and logged a total of 295 hours, 11 minutes in space during the mission.

Worden was born in Jackson, Mich. He received a bachelor of military science degree from the United States Military Academy at West Point, N.Y., in 1955, and master of science degrees in astronautical and aeronautical engineering and instrumentation engineering from the University of Michigan in 1963.
Posted by Joel Raupe at 6:36 PM