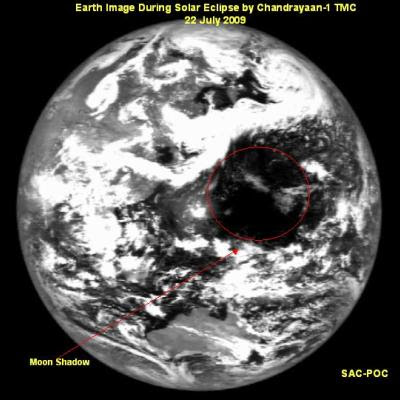 The Shadow of the Moon moves over Asia, during the solar eclipse July 22, the longest in duration until 2132, is plainly seen from lunar orbit by India's Chandrayaan-1 (Slide 7 of 8, Indian Space Research Organisation)

Bangalore (The Economic Times of India) - India's first lunar mission Chandrayaan-1 has captured the shadow of the moon on the earth's surface during the July 22 total solar eclipse, an Indian space agency official said Tuesday.

The images were captured by the special terrain mapping camera (TMC) on board the spacecraft.

"Chandrayaan tracked the movement of shadow of the moon on the earth's surface during the total solar eclipse. The high resolution images shot by the TMC from 7.45 a.m. shows the moon's shadow spreading from north-eastern China to northern parts of Australia," Indian Space Research Organisation (ISRO) Director S. Satish said.

The dark shadow of the umbra region can be clearly seen in the series of images the space agency has released after they were received at ISRO's deep space network (DSN) at Baylalu, about 40 km from this tech hub.

"The digital images were processed and scanned at our space applications centre in Ahmedabad and telemetry, tracking and command network (Istrac) in Bangalore. The capturing of the celestial event confirms that the spacecraft is satisfactorily orbiting the moon at 200 km with all its payloads," Satish said.

The nine-month-old mooncraft suffered a setback in April-May when its star sensor malfunctioned and it lost orientation due to excessive radiation of the sun when it was orbiting at 100 km above the lunar surface.

ISRO scientists overcame the disorientation by using antenna-pointing mechanism and gyroscope on board the spacecraft, which is orbiting around the moon at a height of 200 km.
Images from ISRO HERE.
Posted by Joel Raupe at 4:55 PM