A rille to rover over near Rimae Hevelius 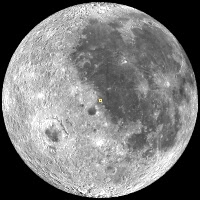 Remotely sensed data acquired by spacecraft allow scientists to study the geology of other worlds without ever setting foot there.

The investigation of image data is usually the first step in unraveling the origin of a planet’s observed landforms and their evolution -- this scientific study is called planetary geomorphology.

Characterizing geomorphologic features is of the utmost importance for planning both a safely landed mission as well as a rover's path – it would be unfortunate if a rover sent to the Moon got stuck because it was sent to a location it could not traverse. The curved depression in today's Feature Image, called an arcuate rille, is lined with boulders.  This is an example of a landing site that would be hazardous for a rover to land in without a very detailed look at the surroundings.

This unnamed rille (0.141°N, 295.362°E), roughly 1 km across, is located on the edge of the southwestern region of Oceanus Procellarum.  As the mare deposits that formed Oceanus Procellarum cooled and contracted, fracture systems developed along the mare-highlands boundary. Near this boundary, loading of denser basalts (mare) over less dense crustal materials (highlands) results in tectonic stresses that can cause rock to pull apart along fractures, forming arcuate rilles.

The boulders on the floor of this rille are most likely material that has been eroding away from the walls. Some of the boulders reach diameters up to 12 meters. While an autonomous rover would likely require a lot of time to maneuver amongst the boulders, a human driver on the lunar surface might quickly and easily navigate a safe path around the boulders.

If you were an astronaut on the surface of the Moon, do you think you could find a safe path through this rille?  Trace your path on the full resolution LROC NAC below.