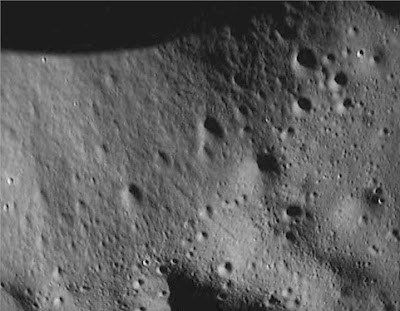 "Not since Ranger 9," Chuck Wood reports over at LPOD, "in 1965, has a probe crash-landed into the Moon with cameras clicking all the way down. Until yesterday. India's Chandrayaan-1 satellite, which recently achieved lunar orbit, released a small Moon Impact Probe (MIP) which spent 25 minutes diving towards the surface before reaching its target, reportedly inside Shackleton crater. These two images from the sequence appear to be from near the end."

The Hindu reports ISRO "Over the Moon"
India Fifth Nation in World to Reach Moon
The Times reports from Mumbai HERE.

MUMBAI: The tricolour landed on the Moon at 8.31 pm on Friday, opening a new chapter in the history of India’s space exploration. ( Watch )
Posted by Joel Raupe at 4:53 AM