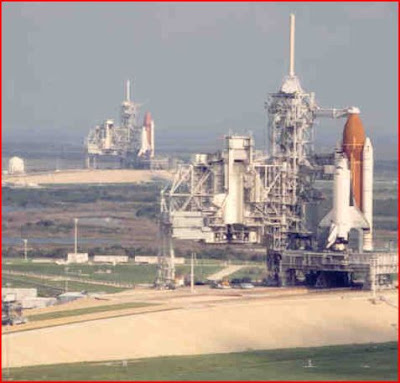 KSC - As deadlines approach for decisions on the Hubble repair mission, while repairs from Hurricanes Hanna and Ike continue, NASA displays a taste of the earliest dreams once were of Space Shuttle glory. Atlantis readied for mission-critical Hubble Space Telescope repairs (the satellite the Shuttle was designed around) and Endeavour, standing by first for back-up and rescue and, if all goes well, for continued construction of the International Space Station.
A rare opportunity to view two shuttles on the pad testifies to the unthinkable, retaining the Shuttle program beyond thirty years to 2015, and thirteen additional missions, along with the X-37 as lifeboat for ISS, is increasingly seen as a real possibility.
As Orion Block A is developed, money to fly the Shuttle an additional five years will force the off-set of Constellation, Altair, and U.S. spaceflight to the Moon into "the out years," beyond 2020.
What fault does the commerical space industry, and a skiddish investment community, have for not having filled the gap with private manned orbital transportation? Will the window for such opportunity fail?
As Americans wait for the return to the Moon, will NASA speed or slow private space development? Will the Chinese, ESA, and Star City beat Americans back to the Moon?
Posted by Joel Raupe at 5:13 AM